SHE: BIKE/SPOKE/LOVE by FW bicyclist and writer Tammy Gomez is going to AUSTIN for performances along the hike/bike trail in the Spring of 2012.

And Tammy is doing the dollar holla – raising funds now. And YOU CAN HELP!

CLICK HERE for more info and to MAKE A PLEDGE. It's easy!

“It's extreme in that it involves bicycles, of various sizes and shapes, with the actors riding them around a small stage, close to the audience. But it's also extreme in how it fascinates with a variety of performance styles. It's modeled after hip-hop theater, using spoken word (the 'If I Hit It' passage was the best verbal moment), showboating (there's a bicycle stunt dude) and a turntablist (DJ SOL*LOS). There's also multimedia, live music and agitprop (the line about how we're 'choking on auto exhaust and government deceit' sums it up best). One thing's for sure, you'll probably never see anything else like it.” 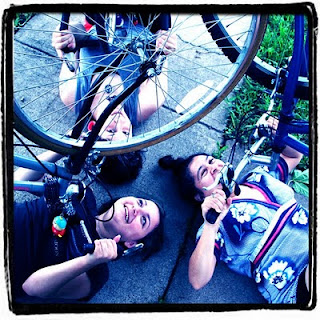