Arrive early (5:30 on) to shop at the Women's Mercado (market of handcrafted items by women - in the Gallery)


FIRST half: panel discussion on culture, literature, and art

INTERMISSION: enjoy art in the Gallery as well as the Women's Mercado

SECOND half: tributes to women w/ performances by:

AND
after the show: check out the art, the Women's Mercado,
and LOTERIA CARD READINGS by Tammy Gomez!


This celebration of influential women in Latin American society is told through music, art and dance.


Join us for a tribute to our mothers, wives, sisters, and daughters as we explore the beauty, strength and resilience of women!

Special tribute to visual artist CELIA ALVAREZ MUNOZ, who was recently honored by the CAA’s Committee on Women in the Arts (CWA). Celia has created art books, installations, and other works for many exhibits, galleries, and events across the United States. She showed work in the Whitney Biennial in 1991, and has been awarded two NEA fellowships. Currently based in Arlington, Texas, we should be proud to have an artist of Celia's talent and stature in our midst.

Talent Round-Up on Saturday - audition for over a dozen production companies @ once!

[Adam Dietrich, artistic director of The Butterfly Connection--based in Fort Worth--sent along the following announcement. I don't know that auditioning artists would take very graciously to being alluded to as "cattle", but I guess the Butterfly folks were taking a stab at alliteration. I might stop by, as I am looking to recast a few roles for my play "She: Bike/Spoke/Love.]

Requirements: 1 Minute Monologue, 1 Minute Acapella Song, 1 Minute Dance Routine with CD Accompaniment, and 2 minutes of improvisation and auditors questions. (If talent does not sing or dance, no song or routine is required.)

Reps and talent scouts from such notable Metroplex theaters as Casa Manana, Circle Theater, Hip Pocket, Kitchen Dog, Teatro de la Rosa, and Pantagleize will be in the house, taking notes and names.

They're considering all performing artists/talent, whether Equity or Non-Equity.

It's almost time for the annual theatrical performance of Eve Ensler's powerful work "The Vagina Monologues" in Fort Worth.

So, how do we get ready for this?

How do we raise a little awareness to the ongoing struggle to end violence against women & girls?

How do we help raise a little $$ to stage the play and contribute to the V-Day Fund?

Well, what we do is attend and support the annual

Open to the public - free admission, but DONATIONS accepted.

...and don't miss this year's production of "The Vagina Monologues" (hilarious, poignant, and performed by all women):

It's a virtual FXFW (fall by fort worth) in one night tonight, cuz there're three shows happening in the Fairmount neighborhood aka Hospital District aka coolest neighb in the city. I'm on a broken foot, so I'll be glad if I can get a spot on the Chat Room patio, within earshot of Birds and Batteries' early night (before midnight) set. I'd recommend this SF (San Francisco) band for the more mellow audience; head out to the Cri Crow-hosted bash at 1919 Hemphill, with headliner Prizzy Prizzy Please if you have two stable ankles, opposable thumbs, and feisty fists to raise. Then there's an underground punk show at an undisclosed (sometimes this helps preserve the spot, on the d.l.) venue, with Florida favorites This Bike is a Pipe Bomb. Whatever you do, get out and check out the bands falling by Fort Worth tonight--on their way to SXSW in Austin.

[ Omigod, the setbacks that PETRA'S PECADO ("Petra's Sin") has encountered since the Cara Mia Theatre first tried to stage this Rupert Reyes-scripted comedy late last year. First, there were problems with securing their venues, and then their lead actress fell ill and could not be immediately replaced--the director tried to yank me into it, but my schedule would not allow, sorry Rodney. The shows were cancelled and the whole production was put on hold until just now. Still more casting dilemmas arose, but lo & behold, the magical miracle of all miracles has seen to it that the SHOW WILL--FINALLY--GO ON!! If anybody deserves a "courageous stamina in the face of adversity award", it would be Rodney Garza & the whole Cara Mia Theatre gang. Y'all break a leg on Thursday! ]

the Dallas premiere of
the original Spanglish comedy
by Rupert Reyes 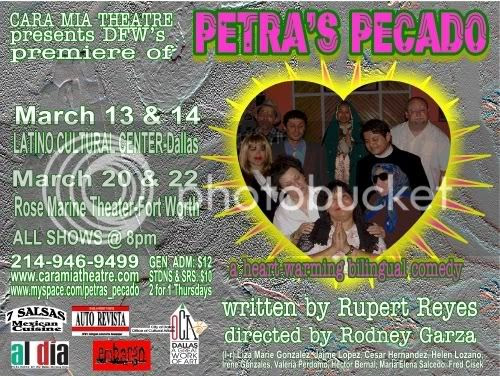 PETRA'S PECADO (Petra’s Sin), is a unique script that beautifully blends language so that it is enjoyed by English- and Spanish-speaking audiences alike. PETRA'S PECADO is a hilarious comedy that has touched people’s hearts by reminding us of life’s everyday miracles.

For this revamped production, Guest Director Rodney Garza ("El Chuco y La Che" & "Martin"), has assembled a mini-reunion of the world premiere cast of PETRA'S PECADO. He brings award-winning actress Irene Gonzales from Austin, who played the original Petra Dominguez in the first sold-out runs in San Antonio and Austin. Ms. Gonzales was nominated for an Austin Critic’s Circle Award for her portrayal of Petra. Also joining this Dallas cast is Maria Elena Salcedo ("Las Nuevas Tamaleras") from San Antonio. Ms. Salcedo will be reprising her role as Clara Ramirez, Petra’s co-worker and feisty friend.

Garza, Gonzales, and Salcedo have worked together on various productions, including the world premiere of "Petra’s Cuento", the second installment of Reyes’ Petra’s Trilogy. Garza is elated that the schedules worked out. Says Garza, “Everytime I work with these ladies I feel like the luckiest director. They’re so natural in their roles that they make my job easier. The DFW area is in for a treat.”

Cara Mia Theatre also introduces some new talent to the DFW theatre community. The role of Lupita Montana will be shared on alternating weekends by Valeria Perdomo and Eleonor Hernandez. Also new to the cast of PETRA'S PECADO is Helen Lozano, who will be portraying the role of Petra’s cranky friend Tacha Alvarez. All three actors have taken on their parts with refreshing enthusiasm and zeal.

Returning cast members from the production that was supposed to run last winter include: Liza Marie Gonzalez as the conniving business rival Tina Tamayo; Cesar Hernandez as the high school drama teacher Rudy Diaz; Hector Bernal as the new priest in town Father Johnson; Jaime Lopez in the role of the cantankerous Chano Orozco; and Fred Cizek playing the role of Petra’s unwitting husband Rafael Dominguez.

Buy tickets online for $2 off.

Labels: Art event to check out

I got to hear Carl Stone's set last night, as presented by local producing outfit OTHER ARTS. It was awesome fabulous, and I was jettisoned to other worlds/words as I sat listening to Stone's electronic aural improvisations. Highly recommended.

[Thanks to producer, Herb Levy, for daring and caring to offer some great music events here in Cowtown, which probably would never be presented otherwise. Here's the promo blurb that Herb sent out via email this week. Get on this man's email list today...]

Just a quick reminder that Other Arts is presenting two concerts by live computer music pioneer, Carl Stone this weekend.

Using a MacBookPro running the software suite Max/MSP, Carl creates his music by cutting, splicing, layering, distorting, and otherwise digitally altering samples of music by popular, classical and world music artists. He's presented his work on every continent except Antarctica and these are Carl's first performances in North Texas. You won't want to miss this chance to hear him.

[ALREADY HAPPENED: IT WAS SO COOL !!!! Friday, March 7th - a program of recent short works, including pieces
from his recently released CD /Al-Noor]

8:00 PM at Cliburn Recital Hall, 330 4th Street in downtown Fort Worth.
Tickets are $25, $15 for students and seniors; combined ticket packages
for both shows are $40, $25 for students and seniors. Tickets are
available from Bass Tickets 817 212-4280; online at www.basshall.org, or
at the door on the evening of the performances.
Posted by Tammy Gomez at 3:58 PM No comments:

Labels: Art event to check out

Wow, this anthology, HECHO EN TEJAS, was released over a year ago, yet the reviews keep a-coming. This latest assessment appeared in the Sunday magazine of the Santa Fe New Mexican this week.
Posted by Tammy Gomez at 6:06 PM 1 comment: