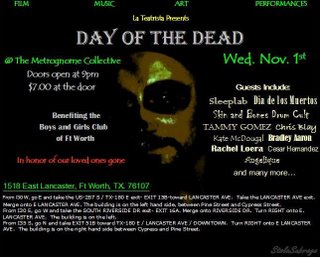 Posted by Tammy Gomez at 5:54 PM No comments:

"There's no money in poetry,
but there's no poetry in money, either."
-Robert Graves

[Thanks to fellow Macondista Jackie Cuevas for sending along this reminder about Anzaldua's papers being acquired by the Benson Latin American Collection at UT-Austin. It's great that Anzaldua's collected writings/scholarly work is going to stay in Tejas, her birthland.]

The public is cordially invited to attend a program and exhibit commemorating the opening of the Gloria Anzaldúa Papers, recently acquired by the Nettie Lee Benson Latin American Collection (at the University of Texas at Austin).

You can find more info about the Gloria Anzaldúa Papers online.

after ofrenda night for Devin

Hey Tammy,
How were things at Hemphill Mon? I seriously couldn't believe it. I never look at my bulletins and I happened to see the bulletin that you had posted, but for some reason I thought it wasn't literal. This week has been so emotionally insane.

I went to all the sites that you listed and smiled at her smiles along with tears.
I went and got some seeds to plant around the front yard in honor of her. They are Icelandic Poppies. Since I couldn't make it to the Hemphill memorial, I decided I'd do my own.

What happened, if you don't mind me asking? How? I'm so confused.
Well, I just wanted you to know that I sent loving memories that way.
Hope all is well with you, Tammy.

I love you,
Wendy
Posted by Tammy Gomez at 7:52 PM No comments: 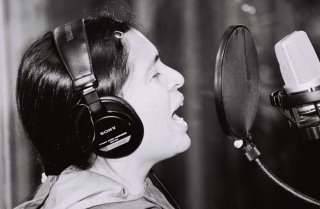 Yes, you now have the opportunity to sign up for an all-day workshop with spoken word artist Tammy Gomez. Sponsored by the Writer's Garret--a literary arts organization based in Dallas--, this workshop will allow Tammy to share the strategies and exercises that have helped her more confidently and successfully present her original poetry onstage.

Each participant in this poetry intensive will be asked to bring selected pieces of their original writing, which will then be adapted for a performative presentation. Video documentation, vocal and editing exercises, and demonstrations of award-winning spoken word artists (on cd and dvd) will be included as part of the workshop.

Taking your poetry from the page to the stage can be fun, but it can also help your work gain a new audience in venues beyond the coffeehouse circuit.


WHAT: PERFORMANCE AND POETRY INTENSIVE WITH TAMMY GOMEZ

WHO TO CONTACT: Grace Kenney of the The Writer's Garret

TAMMY GOMEZ is an award-winning performance poet and writer, whose essays and poetry have been anthologized in many publications including TERRA FIRMA (Agave Noir Press), CONJUNCTIONS (Bard College, NY), CANTOS AL SEXTO SOL (Wings Press), and the forthcoming HECHO EN TEJAS (University of New Mexico Press). She is profiled in LAS TEJANAS: 300 YEARS OF HISTORY (University of Texas Press) and received the Austin Chronicle Critics' Choice distinction as the "Best In-Your-Face Poet" in 1994.

She has performed in over twenty U.S. cities, including Madison, Denver, San Jose, Berkeley, and Laredo. At times, she has performed with musicians and other artists in collaborative contexts that has established her work as cutting edge, provocative, and unforgettable.

Tammy currently works with youth in an afterschool arts program, and is happy to announce that she has recently been awarded a 2006-2007 NALAC (National Association of Latino Arts & Culture) Artist Production Grant--in support of her spoken word theater production of "SHE: Bike/Spoke/Love", an original script.
Posted by Tammy Gomez at 8:09 PM No comments:

Interesting recent article in the Village Voice, brought to my attention by Cinque Hicks at BARE AND BITTER SLEEP...

Here's one of the best quotes from this Jerry Saltz article, which you can read in its entirety here:

Imagine calling two pets, one a dog, the other a cat. Asking a dog to do something is an amazing experience. You say, "Come here, Fido," and Fido looks up, pads over, puts his head in your lap, and wags his tail. You've had a direct communication with another species; you and Fido are sharing a common, fairly literal language. Now imagine saying, "Come here, Snowflake" to the cat. Snowflake might glance over, walk to a nearby table, rub it, lie down, and look at you. There's nothing direct about this. Yet something gigantic and very much like art has happened. The cat has placed a third object between you and itself. In order to understand the cat you have to be able to grasp this nonlinear, indirect, holistic, circuitous communication. In short, art is a cat. 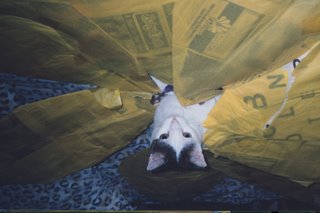 Posted by Tammy Gomez at 9:22 PM No comments:

On Monday, October 9th, many of us will be celebrating the life and memory
of Devin Adams at 1919 Hemphill. It's a potluck performance
art painting party and commemoration. We're inviting folks to share:
food/drink, songs, poetry, art, candles, flowers, and whatever else reminds
you lovingly of our special friend.

WHERE: 1919 HEMPHILL ST. (you may park across the street in the
laundromat parking lot)

WHAT TIME: 4pm - seedpaper-making (handmade paper with seeds
embedded in it, which can then be inscribed with messages
to honor Devin, and later planted anywhere you like.

7pm - potluck (bring food/drink!), screening of video of Devin
in performance, and communal celebration of her life with song,
poetry, storytelling, and art.

please spread the word to anyone who knew Devin Adams--
she truly was our
Fort Worth, Texas;
Lincoln, Nebraska;
Keene, Texas;
and California
"AUTONOMY STAR"!!
Posted by Tammy Gomez at 10:51 AM No comments: 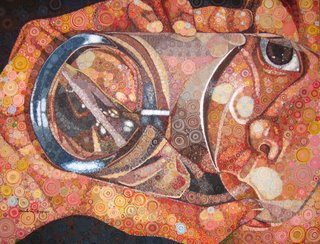 This year's event will feature a live set (at 6pm!) by SLEEPLAB, who could be dubbed Fort Worth's answer to the musicians of the BUENA VISTA SOCIAL CLUB but that's a kinda lazy comparison, cuz the SLEEPLAB is definitely a multi-flavor.

Okay, summing it up: THE 2nd Annual Fall Showcase (art opening and music party), 5-11pm. Located in a warehouse on a quiet, dark back street: 2800 Shamrock Ave. Suite G. Admission cost raises funds that will go to MEALS ON WHEELS. For more information (and some nice color repros of the art to be shown) click here.

Okay, here's the freebie in town tonight. The Hispanic Women's Network of Texas--Fort Worth Chapter is hosting a Latina art exhibit, which opens at the Rose Marine Theater art gallery (Galeria de la Rosa) from 6-9pm.

For even more info: HISPANIC WOMEN'S NETWORK OF TEXAS-FW.

In my world, I can only justify PLAY if i've completed at least a little WORK. And in the activist realm, our impact and progress is directly proportional to the amount of PLAY we can mix in WITH the WORK. Employing humor and festive antics to speak a message and direct an action can do wonders for social justice revolutionary momentum, not to mention the good it can do for committed activistas. I think bitter, bile-infested activists (regardless of where they live on the political continuum) are BORING and TOXIC.

Speaking of TOXIC, there's some unbreathable air in these parts--North Texas is what i mean. The upstarts addressing this big concern are the DOWNWINDERS, a regional activist group with designs on raking gubernatorial incumbent Rick Perry over the coals (pun intended) because of his continuing love affair with polluting energy industries.

So, tonight, at 6pm, in downtown Dallas (near Houston & Young, not even a block from the TRE train stop), you can see the DOWNWINDERS' huge 3-d caricature of Governor Rick Perry affectionately smooching a smoke stack. It's mounted on a hay trailer directly from Midlothian. It's big. It's funny. And Perry the Pollution Lover might actually see himself in effigy tonight as he is scheduled to debate the other three major gubernatorial candidates at the Channel 8 studios at 606 Young Street--next door to the Dallas Morning News building.

Here's what the DOWNWINDERS have to say about Perry on clean air: "Time and again, Governor Perry has gone out of his way to protect the oldest, dirtiest smoke stacks in DFW - the circa 1960 "wet kilns" of the the Midlothian cement plants. Now, with a new clean air plan being written by Perry appointees for DFW, it's important that these industrial clunkers either be modernized or replaced. No more special treatment, no more grandfathering, no more exemptions. Yet, Perry seems determined to keep them up and running as they are - with only the rudimentary pollution controls they had when they first opened decades ago. And remember--four of these wet kilns still burn hazardous waste at TXI."

Identify your GOALS, Make your PLAN, Strategize with ALLIES, Work 'til it WORKS, then PARTY your LOVE !
Posted by Tammy Gomez at 8:57 AM 1 comment:

i'm hearing your pain, your curiosity...

...and will be offering updates concerning Devin, our dear & beloved friend and magical artist of light and sound. A mutual friend, Machete, will be going through alot of Devin's journals and other creative musings, and--rest assured--i will encourage Machete to make some of these available to you so you may know Devin's words and work.

I myself had the fortune and destiny to be able to collaborate with Devin in performance a number of times, and because i am now learning the value of documentation of improvisational work and art, i actually VIDEOtaped some of our/her recent shows. In these videos, Devin is singing, dancing, whirling/twirling and more.

At this moment, there is also an ofrenda (spanish for "altar" or "table of tribute") on my front porch. Folks here locally have been adding offerings to it, with poems, photos, flowers, red shoes, all adding to the mix. If you want to mail something to add to this altar, just let me know and i'll email you my address. Of course, i'll need your personal email address.