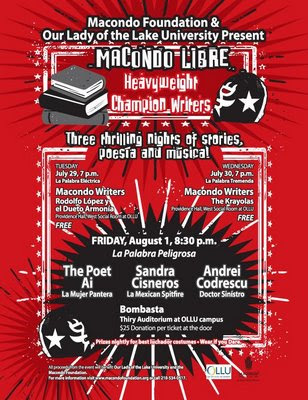 Check it out! Check it out! I am emcee-ing all 3 events, 3 different noches de palabra y performance! The big big night is on Friday, August 1st with heavyweights Andrei Cordrescu, Ai, and la Sandra Cisneros -- with music by BOMBASTA! All happening on-campus at Our Lady of the Lake University in San Antonio. FREE ADMISSION, OPEN TO THE PUBLIC. You gotta see me in my Lucha Libre outfits--thanks to Trae the master-seam-ster for hooking me up with nice threads for all 3 nights!! Ahi te miro!

about emcee/Macondista Tammy Gomez a.k.a. RelampaGomez
Tammy Gomez is a spoken word artist and multimedia performer who just returned from the 4th annual Encuentro de Escritores Jovenes in Monterrey last week. In September 2007, the world premiere of her experimental obra de teatro,"She: Bike/Spoke/Love", drew a standing-room only audience and received critical acclaim. Tammy is currently working with musician Ramsey Sprague, creating soundscapes for her lyrical stories. Tammy also produces PALABRAZOS, which is an annual festival of literary performance in Texas.


Alicia Vogl Saenz is a native Angelino of Ecuadorian and Czechoslovakian descent and has had poems in Blue Mesa Review, Drum Voices Revue and Grand Street. Her chapbook is The Day I Wore the Red Coat.

Emmy Pérez is the author of SOLSTICE, a poetry collection. Currently, she is an Assistant Professor in the MFA program at UT-Pan American in the Rio Grande Valley and teaches poetry in juvenile detention centers. More info at: www.womenwriterscollective.org/emmy.html.

Vincent Toro is a Sorta Rican poet, playwright, and music producer from New York City. He is currently the Theater Arts Director at the Guadalupe Cultural Arts Center. Vincent blogs at: http://sortaricanpoet.blogspot.com.

Julie Marin and Cara Wallace (students from the GCAC's Teen Arts Puentes Project)
Julie Marin is an actress and poet. She has starred in numerous plays at her school, the Edgewood Fine Arts Academy, and at the Guadalupe Cultural Arts Center.

Cara Wallace is a poet and actress who attends Madison High School, where she has earned distinguished honors in the city's UIL One- Act Play Competition.

Anel Flores is an educator at the secondary school level who teaches art and writing. She is also an artist who explores painting in abstract forms. Anel identifies as a lesbian writer and is developing her thematic base from her cultural background as a Chicana.

Writer and photographer Beatriz Terrazas has documented a range of topics, including a pontiff’s visit to Cuba, the Mexican vanilla harvest, and the philosophy of a resolved death.


Carla Trujillo is the author of What Night Brings (Curbstone Press), editor of Chicana Lesbians: The Girls Our Mothers Warned Us About, and Living Chicana Theory (Third Woman Press).

Gabriela Jauregui (b. Mexico City, 1979) is the author of Controlled Decay, her debut poetry collection published by Akashic Books this June, which, according to The Brooklyn Rail "reaches a passionate fever pitch we associate with Latin giants like Ernesto Cardenal and Nicanor Parra," and the El Paso Times says it "is solid with craftsmanship, passion and authority." She has work forthcoming in the Afro-Hispanic Review and has published her critical and creative writing in BOMB, Hayden's Ferry,
Guernica Magazine, Líneas de Fuga and The Aesthetics of Risk, amongst others.


Liz González’s poetry and fiction have been published widely. Manifest Press published her chapter book, Beneath Bone, in 2002. For more information visit www.lizgonzalez.com.

Margo Chavez-Charles grew up in southern New Mexico, wandered the world a bit, and returned to live in New Mexico, where her heart resides. She lives in Santa Fe and teaches part-time at the University of New Mexico and at the Santa Fe Community College.

Michelle Otero is the author of Malinche’s Daughter, an essay collection based on her work with women survivors of sexual assault in Oaxaca,Mexico.

Award-winning author Norma E. Cantú is professor of English and U.S. Latina/o Literature at The University of Texas at San Antonio. Her scholarly interests include folklore, Chicana literature, and borderlands studies. She edited Flor y Ciencia: Chicanas in Mathematics, Science, and Engineering (2006) and co-edited the anthologies Telling to Live: Latina Feminist Testimonios (2001) and Chicana Traditions: Continuity and Change(2002). She is also author of the award-winning Canícula: Snapshots of a Girlhood en la Frontera (1995).

Rachel Jennings is a San Antonio poet and scholar who teaches at San Antonio College. She is originally from East Tennessee.

Ruth Behar lives in Michigan and Miami. Her new book, An Island Called Home: Returning to Jewish Cuba, is a memoir about going back to lost places.

Vicente Lozano, an Austin based writer, has been trying to make sense of South Texas and his family's place in it since moving back after his father's Air Force retirement. He was a 2006-7 Dobie Paisano Fellow, and is completing his first novel, when not minding the computers as a Systems Analyst for the University of Texas.
____________________________


Carolina de Robertis is a writer, translator and compulsive reader based in Oakland, California. Her first novel, The Invisible Mountain, is forthcoming from Knopf in 2009.

A San Antonian, Ignacio Magaloni has read at the San Antonio Poetry Festival, The McNay Art Museum, and other poetry venues. Published in magazines such as The Texas Observer, and A Quien Corresponda, and in the anthology Is This Forever, Or What?, edited by Naomi Nye, Ignacio teaches literature and writing at Northwest Vista College.

tatiana de la tierra is a Colombian-American writer, publisher, editor and librarian. She’s the author of For the Hard Ones/ Para las duras.


Amelia María de la Luz Montes is a Chicana Lesbian writer y profesora. Born and raised in Los Angeles, Califas—she now resides on the Great Plains of Nebraska and is busy writing a memoir, a collection of short stories, and teaching literature.

Angie Chau was born in Vietnam and has since lived on three continents and an island. She graduated with a master's degree in creative writing from the University of California, Davis where she also taught undergraduate fiction and was the fiction editor for The Greenbelt Review. Her work has appeared in the Indiana Review, Santa Clara Review, Slant, and the anthology, Cheers to Muses. She now lives in Northern California.

Ben V. Olguín is a translator, poet and literature professor at UTSA. His poetry has been published in Borderlands, Callaloo, North American Review and other publications.

Erin Bad Hand is from a small town in the southwest. She is interested in long conversations with good people and is sometimes overly cautious.


ire’ne lara silva lives in Austin, TX and was the Executive Coordinator for the Macondo Writing Workshop and Macondo Foundation from 2004 to 2008. Her poetry and prose has appeared in CIPACTLI, The Worcester Review, Rhapsoidia, Soleado: Revista de Literatura y Cultura, Borderlands: Texas Poetry Review, Palabra, The Mesquite Review, The Weight of Addition: Texas Poetry Anthology, Cantos al Sexto Sol Anthology, and the 2001 AIPF di-verse city odyssey anthology. She is the 2008 recipient of the Gloria Anzaldua Milagro Award.

Leslie Larson is the author of Slipstream. Her second novel, Breaking Out of Bedlam, will be published by Random House/Shaye Areheart Books in 2009.

Lorraine Lopez is an assistant professor at Vanderbilt University and associate editor of Afro-Hispanic Review. She's the author of two books and has a novel (The Gifted Gabaldon Sisters) coming out in October 2008.

INTERMISSION ---- with music by The Krayolas

Miryam Bujanda is from la frontera El Paso, but now lives in San Antonio. Her life experiences have taught her early on that truth telling is difficult. She is working on a memoir about love, sex and betrayal.

Born and raised in East Los Angeles, Pat Alderete writes about the beauty and brutality of varrio life, rendering the complex inner worlds and strict social hierarchies of a community too seldom observed in literature.

René Colato Laínez is the author of Waiting for Papa, Playing Loteria, and I Am Rene, the Boy. Colato Laínez is a graduate of the Vermont College MFA program in Writing for Children & Young Adults. He has been a bilingual elementary teacher at Fernangeles Elementary School, where he is known by the students as "the teacher full of stories." More info at: www.renecolatolainez.

Rosalind Bell is the current writer in residence at Macondo House/Cafe Azul. COLORLINES magazine named her an INNOVATOR of 2008. In November 2007 and March 2008, The University of Puget Sound produced her play, "The New Orleans Monologues" to sold out audiences. Her screenplay, "Le Cirque Noir" about the rise and fall of the Duvaliers of Haiti will be read as part of the Downtown Los Angeles Film Festival. Rosalind was writer-in-residence at The University of Puget Sound Fall 2007 and has been invited back as writer-in-residence for the fall of 2008.

Trey Moore is a poet, wanderer, filmmaker, artist working the wonder of life. He is for the little guys and gals, ants, flies, moths. Where would we be without them?

I'm off to Monterrey, Mexico for a great writers' event this week

Thanks to the generous recommendation of my colleague in bilingual poetics, Logan Phillips, I've been invited--as one of 15 Southern U.S. writers--to participate in the 4th annual Encuentro de Escritores en Monterrey from July 16-July 18th, in Monterrey, Mexico.

I am also going to be accompanied by friend and musician, Ramsey Sprague aka The Shortest Distance , who will be doing a short set with me on Friday, July 18th--the final evening of the Encuentro.

For the complete Encuentro schedule, in technicolor Spanish, read on: