I’m walking around and I see brown folks in their doorways, taking in the afternoon sunlight.  I see kids in their yards, tossing footballs and playing tag.  I love the footsteps that I make as I pass through hoods I’ve known since childhood.  I stop one guy crossing the avenue with what looks like a pair of tall boy cervezas in a brown paper bag.  Ask him if he knows when the next bus is due to come through this way.  He politely replies that he doesn’t know.  He’s visiting from California.  All of a sudden this low-income hood takes on a cosmopolitan flavor:  people fly in from Califas to eat pavo in zip code 76115.  That’s hype!  Later, sitting on the bus bench, I see a different young vato trying to cross the same avenue—to the same tiendita—maybe to buy snack provisions before the Cowboy game.  But then I look more intently and see that he’s faltering at the curb, and almost gets hit by a fast-moving car.  I stand up and squint even harder and see that the guy is using a walking cane—the white skinny cane that a blind person holds.  Damn, that’s brave.  Blind and trying to make it to the convenient store across a high-traffic avenue.  I watch him Frogger it, he moves forward half a lane, then doubles back a few steps.  Lets a car pass and then creeps up a bit more.  I take a few steps myself, towards him, thinking I will just go ahead and do a good deed for him today.  But before I’ve gotten any closer, he’s done it, skirted across the avenue and is well on his way to the refrigerated beers or sodas or microwaveable burritos.

Our people wing it however they can.  On foot, on bus, me with my bici--blind at times, but still keeping the body moving forward in time, to countless destinations and away from so many regrets.

This afternoon, a favorite word hits me, and I clasp it in my mind’s mouth, over and over, ‘cause I really like it.  And am so glad that it exists.  And thankful to Roberto Dr. Cintli, el profe, for introducing me to it so many years ago.  REINDIGENIZATION.

People walking, sorting their lives out, moving to where safety and a possible opportunity exist.  Re-arranging our timeline across this geographic region—a landmass called North America.  We are all Americans, shuffling ourselves about.  And reproducing here and there, which means that many brown people, new babies, might happen to be born in this part of this land mass, this continental homeland.

The United States is being reindigenized.  The genocide of long ago wreaked an horrific devastation, but some seeds of continuation were also sowed deeply.  And we have continued to grow, sprout, reproduce, reinvigorate our tribes and tribal affiliations.  The original colonizers and massacre operatives thought they’d finished us off, but we’re coming back.  Like bamboo in your backyard.  Or buffalo in the prairie.  That’s all we’re doing.  Just reindigenizing.  If you cut black hair to the scalp, it will still grow back black.  It may take 500 years, but it’s got thick roots, and it will always come back. 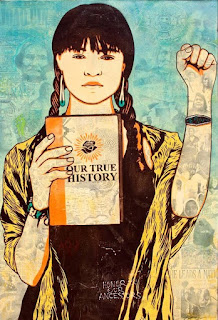