Coming up this Saturday, August 29th afternoon in Fort Worth 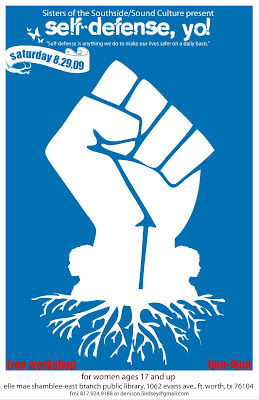 [please click on flyer to see larger version]
Posted by Tammy Gomez at 8:16 PM No comments:

Coming up next Saturday, August 29th - free workshop for women 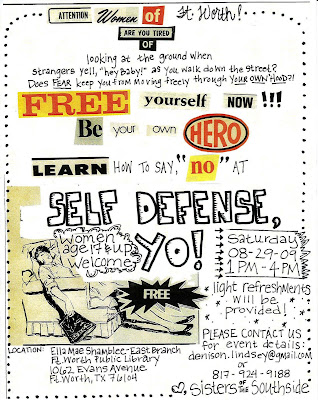 Let me know if you need more info!
Please spread the word. Ages 17 and up.
Posted by Tammy Gomez at 10:46 AM No comments: 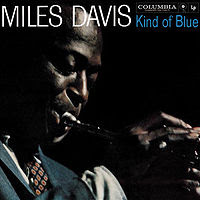 i just want to eat my fist, i am so blown away by this amazing music...i'm gonna lay back and listen to this on audiocassette* tonight, sipping on chilled savignon blanc.

here's one blurb about the album via MOG.COM:

"Kind of Blue was both a radical stylistic experiment and an album parents could put on after dinner without waking the kids. It's a manifesto, a meeting of musical minds, and it's moved millions of copies to remain the bestselling jazz record of all time. Miles Davis' "Kind of Blue," released in August 1959, featured what might be the finest group in jazz history; it virtually founded a new musical style -- called modalism -- but it also marked the beginning of the end of the genre's mass popularity."

more info on Miles and "Kind of Blue"here and here.

lastly, i want to challenge all of you to consider my idea that this nation needs to update its national anthem to reflect the changing times and tenor. twenty years ago, on the 30th anniversary of the release of "Kind of Blue", i suggested that one song off that legendary lp--"All Blues"--would be an amazing choice for national anthem. a soulful instrumental (no lyrics) to play at Olympics award ceremonies, on national holidays, and for other honoring ceremonial purposes.

and, oh yeah, i know that Miles had a history of abusive behavior with Cicely Tyson, but i'm knowingly choosing to give props to the music--but certainly not that aspect of the man.


* the very audiocassette i carried w/ me in the Sony Walkman while bouncing around on the streets of Oaxaca, Oaxaca, in 1990. i cannot now ever hear this album without having flashbacks to those amazing weeks in Mexico.
Posted by Tammy Gomez at 5:45 PM No comments:

After the "Reign" parade on Wednesday, August 12th

Over 200 women, children, and men marched silently from the Tarrant County Convention Center to the old Courthouse, straight down Main Street during the noon hour yesterday, August 12th. Permits and arrangements were successfully secured so that no automobile traffic was allowed on this route of the pedestrian parade. Donning red-and-white umbrellas emblazoned with the catchphrase of the march, the procession cast a striking image for downtown workers who stopped to watch. At the end of the march route, a 30- or so minute rally took place on the east steps of the Courthouse, featuring women leaders Councilwoman Kathleen Hicks and Fort Worth Commission on Women chair Marcy Paul, among others. All spoke vociferously about the various factors that lead to high infant mortality rates in the eastside of Fort Worth.

Kim Parish Perkins, executive director of the D/FW Birthing Project--the beneficiary of a $1,000 check raised at the march/rally--emphasized the prevalence of health disparities in communities of color. Mincing no words, Perkins pubicly called out obstetricians who prioritize their time "out on the golf course and seeing private patients" while treating their lower-income and minority patients as merely "birth canals." Perkins finished off her eyebrow-raising speech with the presentation of a $1,000 scholarship award to a young woman who has been served by the D/FW Birthing Project. Pregnant at the age of 12 and living in foster care, this woman received the services and mentorship of a "SisterFriend" and is now a high school graduate, postured for a college education.

State Senator Wendy Davis appeared towards the end of the rally to remind us of Mark Perry's recent ill-advised veto of state legislation which would have allocated federal dollars to the CHIP (Children's Health Insurance Program). With a tone of consternation, Davis announced that "80,000 more children would have been served" by this legislation. 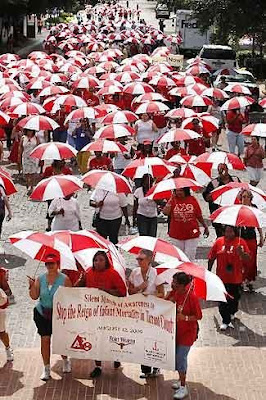 You can, at least for the moment, read the Star-Telegram article ("Tarrant County's infant mortality is high despite efforts") about the Stop the Reign march and rally here.

An excerpt from the article:

"The infant mortality rate for blacks in the [Tarrant] county is 14.4, more than twice that of whites (5.6) and Hispanics (6.0).
Programs such as the Fort Worth/Dallas Birthing Project, established in 1997, have helped by providing services such as SisterFriend, which matches volunteers with pregnant girls."

A few of the rally speakers referred to the need for increased "pre-conception care" for young women, which I found interesting. I'll be looking into what exactly is meant by this in the health services community.


(And, yes, if you're wondering, I participated in the march. Check me out in the front page photo of today's Star-Telegram.)
Posted by Tammy Gomez at 10:32 AM 2 comments:

Stop the "Reign of Infant Mortality" and Save our Children - FW march and rally on Wed., August 12th

Did you know Fort Worth has one of the highest infant mortality rates in the country? Come find out more and support concerned citizen-activists in a public event.

Join up for a "Silent March of Awareness" along Main Street in downtown Fort Worth.

Begins at entrance to Fort Worth Convention Center on Main Street, and ends with a rally on the steps of the Old Courthouse.

Make sure YOU and YOUR organization are represented. (Spend your lunch break for a worthy cause.)

1,000 women will march with 1,000 red umbrellas the full length of downtown Main Street in Fort Worth in order to heighten awareness of the serious issue of infant mortality in our community.

The Fort Worth Alumnae Chapter of Delta Sigma Theta Sorority, Inc., the City of Fort Worth Commission for Women, and the Fort Worth Junior League have partnered together to sponsor this march to educate our community on the issues surrounding
infant mortality.

The Hispanic Healthcare Professionals Association (HISPA) will be participating in the march as well.

Please meet at 11:30 am on Main Street in front of the convention center.  Wear white & red to show your support.
Red umbrellas, for use in the march, will be available at the gathering point for $5 apiece. The proceeds benefit the Fort Worth/Dallas Birthing Project


FMI: stopthereign@yahoo.com
Posted by Tammy Gomez at 9:51 PM No comments:

This is a benefit for Andrea Gonzalez, a local painter who has been granted admission to one of the most prestigious art institutes in the United States. Help a young woman's dream come true.

"I believe through art we have the power to make a positive impact in our community." - Andrea Gonzalez

NEW WORKS FROM AN EMERGING FORT WORTH VISUAL ARTIST

Back in 2000-01, I decided to try my hand at writing sudden fiction, also known as flash fiction. By using the clock on my computer desktop as a stopwatch, I timed my freewrites to 3 minutes max. Though this was a purely self-imposed exercise in trying to generate fresh prose writing, I abided by some hard fast rules. I didn't allow myself to "cheat" by bringing to the page any pre-considered characters, locations, or plot lines. And I had to stop right at three minutes. Wow, what a jumpstart for my brain this practice proved to be. I found that I could do no more than 5 sessions back-to-back, because the pressure of continuous conjuring and composing to a strict deadline took me to a higher plane, and made me light-headed like when I practice my throat singing.

Well now, fast-forward to 2009, and here am I, submitting six sentences of fiction writing to a delightful blog entitled "Six Sentences". After reading about three weeks of previously-accepted entries, I decided to take a poke at this myself, and my first submission was accepted for posting today. Take a look at what I submitted, as well as other writings--leave comments if you like.

(The text above was completed in 10 sentences and about 20 minutes...)
Posted by Tammy Gomez at 8:10 PM No comments:

KERA 90.1 FM has seen fit to schedule the broadcast of "Latino USA", a 30-minute syndicated program produced at UT-Austin, at a much more opportune time. Sundays 5:30pm. This week, la Barbara (Barbara Renaud Gonzalez) sent an email anuncio to let us know that Chicana writers are going to be the focus on this week's episode. Barbara herself will be featured in interviews, as will Sandra Cisneros and Josefina Lopez. I'll be tuning in; "sheck" it out.

"Got the word from Latino USA today! "Books & Women" is a special feature to be aired on LatinoUSA's weekly program this Friday. It includes an interview/reading with Sandra Cisneros, Josefa Lopez, and me. Hope you like it."

Josefina's just released her debut novel, HUNGRY WOMAN IN PARIS. She is probably best-known as the playwright who brought us "Real Women Have Curves." Barbara's GOLONDRINA, WHY DID YOU LEAVE ME? is a novel that she had to leave Dallas (so she has told me) to finish writing. And Sandra, oh gosh, how does one begin? Sandra is the ever-busy, awards-laden and Chicago-raised poeta and novelist who has kicked open the door for burgeoning and future writers such as myself.

Adelante, mujeres de literatura en los Estados Unidos. Let's be inspired by our fellow Chicana sisters and keep focused on our own emerging literary voices.
Posted by Tammy Gomez at 3:26 PM No comments:

...from one place to another.
Posted by Tammy Gomez at 3:16 PM No comments: