JUST found out that my interview for "The Story" radio program is going to be broadcast on National Public Radio TONIGHT!!!

And if you won't be near a radio tonight, you can listen to the show online at 9pm,
streaming live via the KERA 90.1 website at:

Also--You can listen to the archived podcast of my segment w/ host Dick Gordon:

Let me know what you think - Gracias for listening!
Posted by Tammy Gomez at 3:09 PM No comments:

Hanging out with Green Tara for New Year's Eve

I spent the evening last night with the Green Tara.

The focus for the retreat was the Green Tara, the Buddhist symbol of universal compassion and empathic practice. So, Shara and I arrived at the Center just in time for the potluck celebration meal, which had followed the first chanting/meditation session. Not to worry, there were many more such sessions to come, scheduled at 3-4 hour intervals. We had been (according to an email invite I'd received) encouraged to bring sleeping bags so that we might nap in between the sessions. And we did just that.

After eating, we washed our dishes in the communal kitchen and chatted with a few acquaintances that happened to be there for the first time as well. We removed our shoes (a Center requirement) before entering the sanctuary, which was a spacious bright room with plush white carpet and comfy cushioned chairs. I took advantage of the ample space in the back area to stretch my aching neck and shoulders, and soon noticed a guy over to my right doing some yoga work too. It was very quiet and peaceful, though the sound of laughter would break out regularly, as folks of the community chatted in the dining area and outside vestibule.

It soon came to be obvious when the 11pm chant/meditation session was to begin. Shara and I had been apprised as to the procedure of the sessions by a friendly practitioner named Tom. While others chanted and sang the prayers from memory,
the apparent newbies such as myself read directly from the booklet provided for use. I found my mouth getting drier and drier, as the lines we sang were rapid and wordy, in English peppered with Sanskrit and Tibetan words. Staring at the beautiful array of deity statues and ornamentations, and the offering table covered with lit candles, I felt content to bring in the new year in a humble, introspective fashion rather than in the loud, smoky din of a bar or music venue. (Last year, I spent the entire new year's eve night alone, sicker than ever, watching almost the entire BBC mini-series adapted from a Charles Dickens novel.)

By 1am, the chanting was done and the Geshe (teacher) called out "Happy New Year," which prompted everyone to stand and share New Year's hugs and greetings. My friends Be and D'Zyne stepped over to chat and embrace; it was wonderful to see them here--also as first-timers to this Center.

Folks began laying their blankets and sleeping bags along the back wall and also near the front of the sanctuary, and the lights were soon dimmed for this sleep break. Shara and I went out to the car to retrieve our sleeping things and soon joined the others, bedded down for a few hours until the next chanting session, which was to start at 3am.

A gentle whispered wake-up call was issued near my head. "We start in 10 minutes," spoke one of the community members. I roused myself, feeling my mouth all chalky inside, wishing that I'd remembered to bring a toothbrush. In a beautiful wordless choreography, all the once-sleeping people were now up, lighting candles, turning up the sanctuary lights, and finding theirs seats on the floor or on the ample-seated chairs. Shara kindly brought over two blankets, so we could each cover our shivering legs.

Once the session at 3am began, my mind stopped drifting and became attuned to the communal intention, as well as my specific and personal goals. To be clear-minded (not merely sober, but also keenly aware) and thoughtful, with a dedication to rouse what needs to be roused, but to tame, regulate, and simmer the sorrows, doubts, and worries that distract. It was a tough session, staying awake to repeat prayers in a melodic chant, and my thirst seemed a huge obstacle to getting through this experience. But I've been thirsty before, and obstacles are usually temporary, so I plowed through, sometimes merely whispering occasional words rather than forcing myself to keep up forcefully strong. For inspiration, I let my eyes wander over the visage of the Tara statue. Her outstretched right leg, the mudra (spiritual gesture) formed by her fingers, and the shiny headdress on her slightly-bowed head.

Such practice brings out hope in me--a hope to somehow emulate and radiate the characteristics and internal features of spiritual strength and engaged Buddhistic persona. My striving is gentle, as I realize I am not perfect and that I don't have to be "done" or transcendent today.

I am just grateful that I have successfully turned the corner to a new year and will work intentionally to use every day of the next 365 that I might be blessed to live to accomplish good works for the benefit of all and for the betterment of my internal self.

Before the 6am session started, Shara and I rolled up our sleeping bags and blankets, put on our shoes, and headed out into the dawn and into 2011. Searching for pancakes and coffee, having found a most beautiful serenity at the Kadampa Center, lit on the inside. 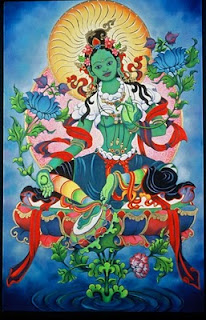 Posted by Tammy Gomez at 8:43 AM No comments: